look at this video and you will see what Israel police did to JEWISH American guy that just said Palestinian have right to return to their land this is the democracy of Israel toward JEWISH and western not only Muslims , and why because he was different 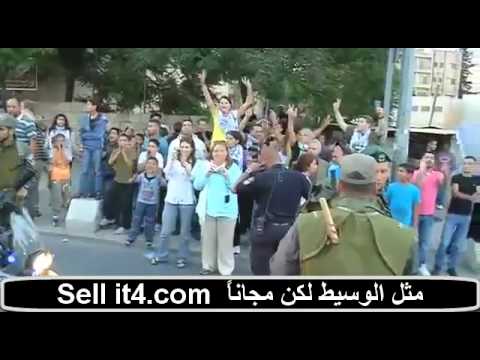 @plato : police do their job for security ???? hahha the guy didn't try to bomb himself or even he didn't insult Israel why arrest him ?? where is the Freedom of Speech ??? answer PLATO I dare you

@Feivel : Really what trouble ??? he said his opinion he didn't even throw rocks on them where is the freedom ???? i can see how Israel respect Americans ??? you want to say youtube is Fake but why you tube videos show Muslims bad is true ???? answer i dare you

@plato : looool and you are not fair woman , Read its Jews news do you think i will believe that there is muslims Israeli police man haha LOOOOOOOOOOOOOL what a source to get news XD

@♪♫RIP Gj♥ Sha'mone☮ : haha who's care this is proof they don't respect the freedom of speech , oh and btw who told you he would be-headed ?? 2 years ago a western woman in our Arabic Islamic country said about my mum Terrorist ( because she wear hijab * not that one which cover face* ) we ignored her she think we don't understand English even she was wrong because she was in Islamic country and she should show some respect , I'm not here to argue the users because they disagree with me I'm here because i don't want everyone become Islam hater like you ^_^

and who don't agree with your democracy you send 100000 KG bomb on his house by the name of Terrorism right ??? the guy in video is free to say what he want as long as he don't insult anyone