You want parents to teach kids this fall? Pay us.

Is college football about to become an election issue?

97% of all climatologists agree that it is real. 99.7% of all recent peer reviewed articles on the subject agree that it is true. There is a mass scientific consensus in this area. No credible institution has claimed it to be false(However some have taken non-committal stances). There seems to be no credible voices to support the opposition. The only people that seem to say it is false are cranks, special interest and puppets of the special interest. Do people really believe there is a liberal science conspiracy? Seriously how can people at least not consider it at least very likely?

Vulken do you have any proof of this? What is to be gained by falsifying evidence?And don't you think more climatologist would have integrity than 3%? Also 3% don't deny it either most of the 3% are not sure. 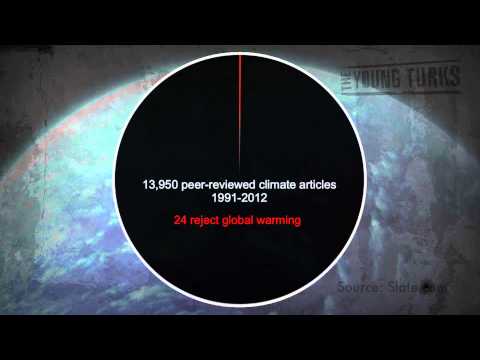 Actually the consensus is about 99.83% on peer reviewed articles. Averaging about 1 new study denying it a year, compared to thousands confirming it be true.

TheSicilianSage More details and a source please. Also how this disproves climate change.

Ed Smurf there are plenty of people saying that the earth is getting cooler and we're heading towards an ice age.

TheSicilianSage I watched that documentary you linked and it has a few problems, actually more than a few.

Carl Wunsch was tricked into appearing in the film and misquoted to support there view here is a quote from him "I believe that climate change is real, a major threat, and almost surely has a major human-induced component." - http://ocean.mit.edu/~cwunsch/papersonline/respons...

Patrick Michaels is paid off by oil companies - http://www.youtube.com/watchfeature=player_embedde...

Scientific Institutions are usually 501(c)3 organizations, so there is not a strong profit motive. And even with scientist not wanting to lose there jobs, there still is oversight be senior members. Are you actually suggesting that only 3% of climatologist have integrity. They are politicizing science just as much as supporters of the belief are, and are trying to argue that climate change believers are Anti-Human.