How is it that someone that claimed to be a profit of God was in so many adulterous relationships?

Joseph Smith the very first Mormon known to man the founder of the Mormon religion declared him self a profit and very many devote Mormons to this day also see him as a Profit.

How many women was all ready married before Joseph Smith married them?

Is it not considers adultery to have sexual relations with someones wife? Is it not very insulting to God to deceitfully marring women in secret that was in fact all ready married?

What is in the KJV and NIV and most any other translation of the bible relating the topic adultery or adulterous relationships? 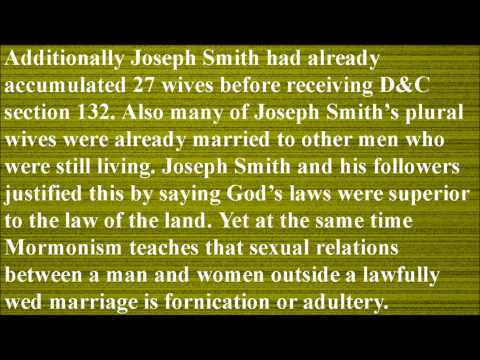 Is it not also true that Joseph Smith was a acting member of the Freemason even till the day of his death?

Is freemasonry not one of the worlds largest known cults active in the world to day?

How is it that so many Mormons that on one hand seem to know the bible very sell seem to be so blinded to the fact that the NIV is criticized because it seems to be missing verse about auditory?

Do the Mormons really study the bible or do they just simply fallow the traditions of men?

11 And for this cause God shall send them strong delusion, that they should believe a lie: 12 That they all might be damned who believed not the truth, but had pleasure in unrighteousness.

Don't get me wrong I am not targeting Mormons alone there are many false religions that claim to be Christian also more people should spend more time reading the bible for them selfs then getting very devote to some crazy religion simply because they claim to be Christian.

Any reasonably good answers will be great post links to more info to support what you say and why.