Why still some Aussies question legality of Murali’s bowling action and ICC rule change was done for him only?

Ok this Q is mainly for the Aussies who complain about Murali and say that ICC changed rules only to accommodate him. Why don’t they understand a simple theory? Let me keep it as simple.

When Chris board reported Murali’s Doosra in 2004 it caused ICC to have another test on Murali. So, one Australian university analyzed his bowling action using advanced biomechanical tests and found out yes he exceeds the allowed amount of degrees of flexing the arm while bowling. But at the same time they analyzed 130 of other past and present international bowlers and found out that 99% (Majority) of them also have exceeded the allowed amount of degrees of flexing the arm while bowling! This caught the entire cricket world with a shocker! Rumors said that there were big names like Mcgrath, Lee, Gillespie and Darren Gough! Even Shaun Pollock, who many thought had one of the cleanest bowling actions, had bent his arm more than the allowed amount! Not only Murali but majority of past and present bowlers has broken the rule apart from Sarwan who bowled within the ICC rule!

So, as ICC can’t Suspend all those majority of bowlers, they decided to extend the amount of degrees allowed while flexing the arm, increasing the previous 5° for spinners and 10° for pacemen, up to 15° for all bowlers . They got no choice but to do it and it was a smart move.

““Explaining why the maximum level of 15° was arrived at, panel member Angus Fraser stated "That is the number which biomechanics says that it (straightening) becomes visible. It is difficult for the naked eye to see less than 15° in a bowler's action. We found when the biceps reached the shoulder the amount of bend was around 165°. Very few bowlers can get to 180° because the joint doesn't allow that.Â ... but once you go further than 15° you get into an area which is starting to give you an unfair advantage and you are breaking the law"

So ICC had very fair reasons to make a rule change considering all those facts. It’s clearly not the fact that they want to change rules for the allowance of Murali only. 15° was the best limit for all bowlers. ICC keep on changing the cricket rules fo the betterment of all players and to maintain the best playing conditions and avoid controversies. (like they changing field setting rules after bodyline series)

Anyone who still have problem with that, please answer these facts…

(1)ICC changed the rule for spinners and also for the pace bowlers! If ICC changed rules for Murali only then why on earth did they change the rule for fast bowlers too?

(2)If the rules changed only to allow one of the greatest in the game like Murali, then why doesn’t ICC roll back changes as Murali has retired now?

(3)For what reason Australian cricket board requested Murali to be their bowling coach last year if he was a chucker? Don’t say that it was bcz after the rule change Murali was ok. If Murali was a chucker CA don’t want him anywhere near their future bowlers!

(4)What do you have to say about ICC changing the rules of field settings when Larwood’s body line bowling got the better of the Aussie batsmen? According to your Murali theory, then ICC had changed the rules to help Australian batsmen with Bradman to handle Larwood! Was that fair?

(5)What power did SL board or Murali have to force ICC to change rules? You can’t even say that BCCI used its power on ICC to help SLC and Murali bcz when ICC changed rules on 2004, BCCI wasn’t powerful like today!

(6)It’d be plain ridiculous if they change a rule for one bowler! Of coz they didn’t, They had many fair reasons for the rule change(as mentioned above) Even a kid would understand this! They did it for the betterment of all bowlers.

(7)If you still go ahead of ICC decision and question that then what about Gilchrist using a squash ball to hold the bat in 2007 wc final. His innings was the difference maker! Otherwise, SL would’ve chased down the target around runner ball. Though ICC had no problem with it, according to Aussie theory of going ahead ICC decisions, Australia and Gilchrist should be DISQUALIFIED from 2007 WC final and SL should be the true WC champs!

But no Lankan complained over that bcz we appreciate any great talent or great performance.

One more thing. Due to the way he is born, Murali’s wrist is unbelievably flexible than any other bowler. That’s why he was able to bowl the Doosra within 15° limit of flexing the arm. His magic wrist is so flexible. This video proves it. 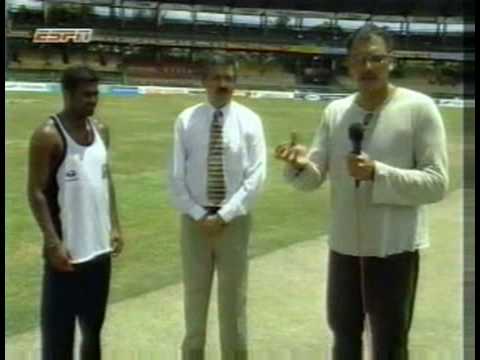 Not just that video but many biological tests proved it. So Murali is a clean legit. I know that Ajmal’s case is different though.

So it’s completely illogical and pointless to carry on this chucking accusation. Do u have any reasonable explanations for those points esp. Aussies? I think the first point itself ends the whole argument. Doesn't it?

Edit: Joeblow, I got your point on my 1st fact. But here’s the thing though. The rule change for the fast bowlers has something to do with the bio. tests proving that even Pollock who pretend to have the cleanest action, had flexed the arm beyond 10 degrees So that was strongly taken in to consideration while changing the rule by ICC.

Like I said in my 4th paragraph ICC did have some very legitimate and strong reasons for the rule change. This clearly proves that Murali effect on their decision is not as huge as some of you guys trying to make. Sure it has some effect but not the major effect on the rule change. It’s not like ‘oh hurry up, we need to change the rules in order to make great Murali’s action legal.”.

If the bio tests proved that Murali, was the only one who had extended the arm more than the allowed amount, then definitely Murali should have been and would have been suspended. But we know that it wasn’t the case. The tests proves 99% of bowlers from the 130 tested, h

And Joeblow :- As far as the video goes even if you leave that, Murali has gone through hundreds of biological tests including one done by an Australian university. You don't find any sportsman who has gone through such amount of scientific tests, having hundreds of electronic equipments attached to the body. He was tested to a pulp. No one can actually fake in real tests. And all those tests have proved that he has a bent arm since his birth. And his wrist has an amazing flexibility which allowed him to turn it like rubber. Those are proven facts under testing conditions. Tests done by Australian scientists themselves.

Lal kutta:- Lol on the other hand, those Australian scientists should be stupid if they don’t analyze the videos of Murali bowling in real matches! They examined Murali videos along with the videos of another 130 bowlers including guys like Pollock, Lee, Mcgrath! And they found out majority of them have broken the rule to a greater or lesser extent!

Not just my 1st point, all the other points matter.