Goya CEO's cozying up to Trump may have backfired

Investigators solve cold case of teen who was murdered

Silver dollar worth $10M for sale by N.J. dealer

If bettas can't be kept in a bowl why do they sell them that way?

I answered a question and got 7 thumbs down about this subject and everytime I go to the fish department no matter if it is Wal-Mart or Petco the bettas are in these teeny tiny plastic bowls with maybe an inch of water (not even half full). I said I did not recommend keeping fish in a bowl but I have seen people successfully keep both small comet goldfish and bettas in bowls sometimes with plants and sometimes not if the water was changed and kept clean.

I decided to let my son pick one out from Wal-Mart because I felt like saving a fish and we named him Lucky and he is in a 10 gallon tank with an African clawed frog and some guppies, snails and a lace catfish and absolutely loves his new home. It's just silly to me how people act with certain things like you are hurting a fish! I feed my fish live fish & insects!!! That's what they eat in the wild...no?

If it's so inhumane to keep a betta in a bowl then isn't it really inhumane to have an aquarium in the first place where they are contained and not in their natural wild habitat? Isn't our "hobby" of keeping fish in a tank the main cause of alot of certain tropical species becoming almost extinct? Would you same people think it is inhumane for human beings to eat fish?

My African Clawed frog is still a baby and the guppies were bought as feeders so when he starts becoming aggressive I will just buy Lucky another fish tank. :) 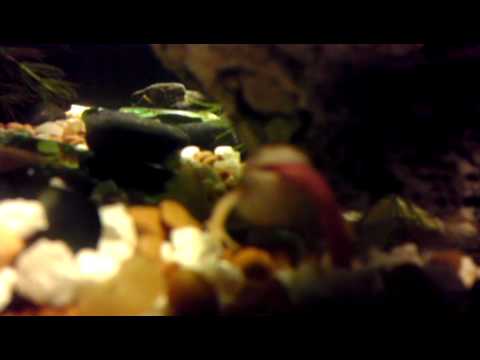