J.J. Watt is a 'hard no' on NFL's labor proposal

Simone Biles teases a move no woman has ever pulled off

Agency that secures Trump's calls may have been hacked

My mum wont take my dog to the vets?

This is really annoying, and upsetting.

My pug who is 10 months old had had a collapse like four times now every 2-3 months apart. The fourth being last wednesday.. The last two were at similar times of the day between 9-10am. The first two weren't. They were at 2-3pm and 8-9pm.

During the first ever one he was limp so we thought it was lack of oxygen. His jaw was clenched and he pooped and peed. (wasnt breathing)

The second time he was coughing and came to find me, then collapsed on his side and when i picked him up he was limp but his jaw was clenched shut. (Wasnt breathing)

The third time was first thing in the morning when he was laying on my bed. He was licking at the air quite excessively and woke me up. He came and lay next to me then rolled onto his back and coughed and went rigid and his eyes went back. Again, he was not breathing. I carried him downstairs to find my mum and he pooped and peed. He came round after say 15 seconds of being put on the floor. He rolled onto his front looking quite confused.

We took him to the Vets and the vet done numerous tests such as an ECG, blood tests, X-rays etc and he was fine, so the vet did stenotic nares surgery and also removed a few extra teeth.

That came to a bill of £490. Last week my mum recieved a check from crufts pet insurance for £390 so she got the majority back...however..

Last wednesday i let my pug out i the garden for a poop and i went and sat at the kitchen table waiting for him. He came running in with a blank expression on his face and jumped up at my legs so i lifted him onto my lap and he sat there for a while quietly. Then he had a small cough and his body went rigid, his neck stretched back, he made a noise, his legs stretched out and he peed and his eyes went back (But he was breathing) So i gently put him onto the floor. This is how he came around -> http://www.youtube.com/watch?v=KboCT_xfbJQ 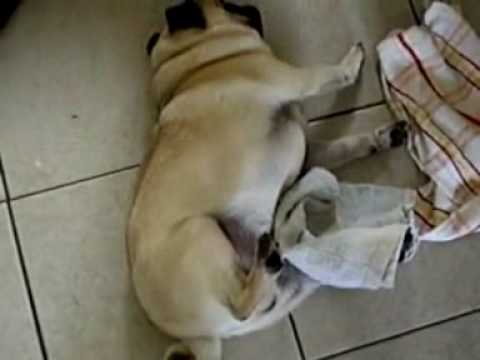 I told her dogs who collapse or have seizures etc don't lay on the floor 24/7..

There is clearly something wrong and she refuses to take me. I have £100+ in my bank account and said i was willing to pay for the first appointment yet she changes subject or just refuses to take me or yells at me. I said i'd even sell half of my stuff.

This is surely some serious health problem, right? What can i say to make her realize this? I love my dog to bits and we have a great bond and i just want him to get the help he deserves with his health. She has a Pug aswell but she doesn't have a bond with him like i have with mine.. She just says "Oh, hes just a dog not a human" .. I don't know why she is being like it because last wednesday she was all up for taking him to the vets now she is making every excuse she can think of. She won't even give me a proper answer when i ask her "What is wrong with me paying for it myself?" ..

So, what can i do to convince her this really is serious..? She says it's normal, it isn't!

1. Doesn't need to be given away. His breeders have already stated they would tkae him back.

2. Im 16, i can get a job. I also start college so i will get my EMA soon. + I do actually have quite a bit of money stashed away that i have saved.

Well, i meant the £100+ could at least get the first appointment out of the way. Hell, i could even sell my damn xbox 360 elite and thr trillion games i have. I dont even use the damned thing. We have the moneym we have the £390 from his pet insurance. It's just getting her to understand this is serious.

Getting rid of him is not an option. We do have the money, my mum just says its not worth paying the vet hundreds because he doesnt know what hes doing (because he failed to solve it last time). Im sure he does, hes a vet. I'll keep talking to her. This dog is what helped me get over depression and selective mutism, so now i need to help him.