Isn't odd that the "left" and the "right" have exactly the same view of the U.S. War on Drugs?

Mother Jones ran an article today that detailed the fact that U.S. War on Drugs is ineffective and primarily hurts minorities while being ineffective. The arguments made in this article were very similar to the argument Ron Paul was making against the U.S. War on Drugs at the Tavis Smiley Republican debates in 2008.

What do you think?? Is this a "bipartisan" change that both wings of the political spectrum could agree on?? 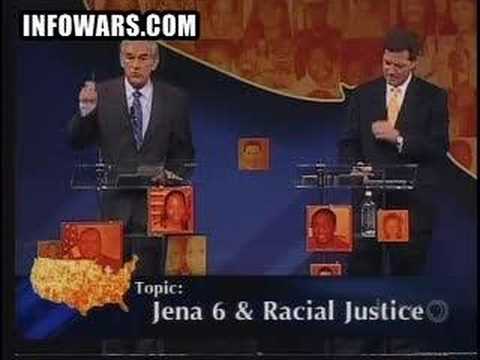 Ever since Barack Obama lifted his right hand and took his oath of office, pledging to serve the United States as its 44th president, ordinary people and their leaders around the globe have been celebrating our nation's "triumph over race." Obama's election has been touted as the final nail in the coffin of Jim Crow, the bookend placed on the history of racial caste in America.

Obama's mere presence in the Oval Office is offered as proof that "the land of the free" has finally made good on its promise of equality. There's an implicit yet undeniable message embedded in his appearance on the world stage: this is what freedom looks like; this is what democracy can do for you. If you are poor, marginalized, or relegated to an inferior caste, there is hope for you. Trust us. Trust our rules, laws, customs, and wars. You, too, can get to the promised land...................................There is, of course, a colorblind explanation for all this: crime rates. Our prison population has exploded from about 300,000 to more than 2 million in a few short decades, it is said, because of rampant crime. We're told that the reason so many black and brown men find themselves behind bars and ushered into a permanent, second-class status is because they happen to be the bad guys.

The uncomfortable truth, however, is that crime rates do not explain the sudden and dramatic mass incarceration of African Americans during the past 30 years. Crime rates have fluctuated over the last few decades—they are currently are at historical lows—but imprisonment rates have consistently soared. Quintupled, in fact. And the vast majority of that increase is due to the War on Drugs. Drug offenses alone account for about two-thirds of the increase in the federal inmate population, and more than half of the increase in the state prison population.