WHAT LAB OR WHO WILL BENEFIT FROM TRYING TO FIND A VACCINE FOR THE SWINE FLU = RUMMY RUMSFOOK & CORP? 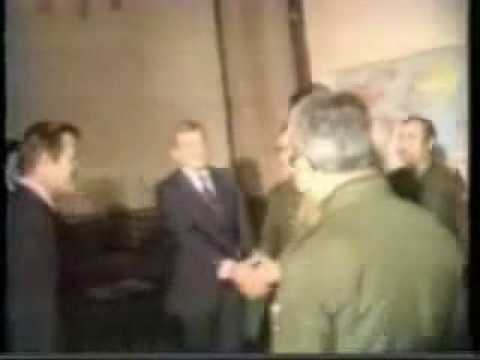 and was that guy in the corner = Cheney?

Aspartame is an additive found in diet soft drinks and over 5,000 foods, drugs and medicine. It was approved in 1983 for use in carbonated beverages.

In reality, aspartame is a drug, not an additive. It interacts with other drugs, has a synergistic and additive effect with MSG, and is a chemical hyper-sensitization agent. Dr. John Olney, who founded the field of neuoscience called excitotoxicity, attempted to stop the approval of aspartame with Attorney James Turner back in 1996. The FDA's own toxicologist, Dr. Adrian Gross told Congress that without a shadow of a doubt, aspartame can cause brain tumors and brain cancer and violated the Delaney Amendment which forbids putting anything in food that is known to cause Cancer.

Dr. Ralph Walton, Professor and Chairman of the Department of Psychiatry, Northeastern Ohio Universities College of Medicine has written of the behavioral and psychiatric problems triggered by aspartame-caused depletion of serotonin.

Aspartame causes headache, memory loss, seizures, vision loss, coma and cancer. It worsens or mimics the symptoms of such diseases and conditions as fibromyalgia, MS, lupus, ADD, diabetes, Alzheimer's, chronic fatigue and depression. Further dangers highlighted is that aspartame liberates free methyl alcohol. The resulting chronic methanol poisoning affects the dopamine system of the brain causing addiction. Methanol, or wood alcohol, constitutes one third of the aspartame molecule and is classified as a severe metabolic poison and narcotic.

The history of aspartame and its approval has a political history as well as a scientific one. According to Dr. Martini,

"When Donald Rumsfeld was CEO of Searle, that conglomerate manufactured aspartame. For 16 years the FDA refused to approve it, not only because its not safe but because they wanted the company indicted for fraud. Both U.S. Prosecutors hired on with the defense team and the statute of limitations expired. They were Sam Skinner and William Conlon. Skinner went on to become Secretary of Transportation squelching the cries of the pilots who were now having seizures on this seizure triggering drug, aspartame, and then Chief of Staff under President Bush's father. Some of these people reach high places. Even Supreme Justice Clarence Thomas is a former Monsanto attorney. (Monsanto bought Searle in 1985, and sold it a few years ago). When Ashcroft became Attorney General, Thompson from King and Spalding Attorneys (another former Monsanto attorney) became deputy under Ashcroft. (Attorneys for NutraSweet and Coke).