James Corden's turn as a gay man in 'The Prom' derided

This top-rated anti-aging moisturizer is only $18

Three things the next COVID stimulus package must have

Will Rockefeller succeed in shutting down US Internet access with Bills 773 & 778?

Rockefeller who gave Americans the worst education system in the world now wants the US Government to shut down your access to the Internet!http://www.youtube.com/watch?v=jCkCWxv3kUE 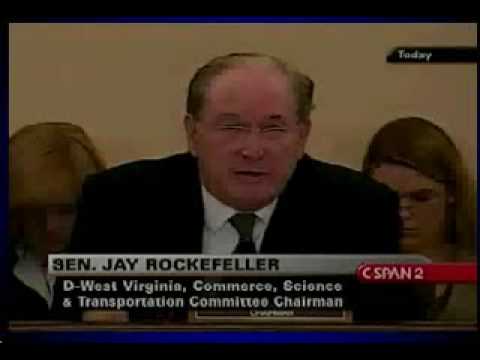 Senate bills No. 773 and 778, introduced by Sen. Jay Rockefeller, who declared last month that the Government would all be better off if the internet was never invented. If the internet was never invented, the corporate media & the Council on Foreign Relations would dominate news and information and alternative media restricted to print would have a far more difficult time counter balancing government propaganda. Government and the elite behind it are sincerely worried about the fact increasing numbers of people get their news from alternative media sources on the internet and corporate media newspapers are falling like dominoes.

If we fail to take swift action, we, regrettably, risk a cyber-Katrina, said fear-monger Sen. Olympia Snowe, R-Maine, who is co-sponsoring the bill. We must protect our critical infrastructure at all costs from our water to our electricity, to banking, traffic lights and electronic health records the list goes on, added Rockefeller.

Rockefellers bills introduced in the Senate — known as the Cybersecurity Act of 2009 — would create yet another government bureaucracy, the Office of the National Cybersecurity Advisor. It would report directly to Obama. Rockefellers legislation would grant the Secretary of Commerce access to all privately owned information networks deemed to be critical to the nations infrastructure without regard to any provision of law, regulation, rule or policy restricting such access

In other words, Obama would have a Cyber Czar in the Commerce Department and the power to shut down the internet. The cybersecurity fraud now in motion will grant the Department of Commerce oversight of critical networks, such as banking records, would grant the government access to potentially incriminating information obtained without cause or warrant, a violation of the Constitutions prohibition against unlawful search and seizure, Jennifer Granick, civil liberties director at the Electronic Frontier

It should be obvious what is going on here. Not if but when the next false flag attack occurs here in America, the elite will turn off the internet in order to control the flow of information. They will tell us they were forced to do this in order to deny terrorists in caves or driving around with Ron Paul bumper stickers on their cars the ability to sabotage the power grid and banks.

Senate bills No. 773 and 778 are about controlling information. The bills have nothing to do with mischievous kids with laptops in Latvia.