Garner recalls 'circus' while being married to Affleck

Where Does the "Big Bang Theory" say the animals got their names?

The Bible says that God brought the animals to Adam for him to name in Genesis 2:19. By naming all of the animals, Adam demonstrated that he was master over them, as God gave man dominion over all of his creatures.

The Bible indicates that when someone names another person or thing, it shows that he has power over them. For example, you'll find the Pharaoh renaming one of the kings of Judah.

Then Pharaoh Necho made Eliakim the son of Josiah king in place of his father Josiah, and changed his name to Jehoiakim (2 Kings 23:14).

There is also the episode of the Babylonians renaming Daniel and his three friends when they were brought captive to Babylon (Daniel 1).

Anyway, my point is, that our God is a God of order. Scripture even says by the mouth of God himself that "Let all things be done decently and in order. 1 Cor 14:40. The account of Creation was done exactly as written. Creation is a fact, It has already occured and God, Elohim the creator and sustainer of all life is maker of all things! He is INDESCRIBABLE! God says Adam, the first man named all creatures. What do the other theories say about where we got names for the creatures? Does anyone have that type of information? Christians have the Word of God which I can confidently say is the truth concerning all things. If you want the truth, The Holy Bible is where to find it. God bless!

Enjoy Chris Tomlin's Indescribable, One of my personal fave's! 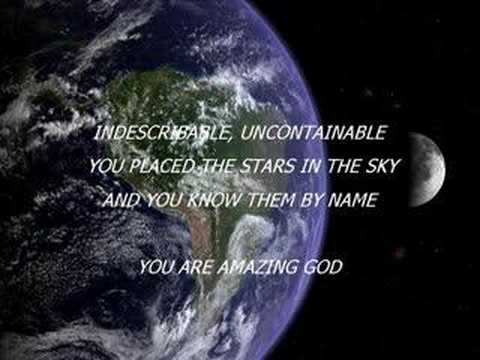 "And out of the ground the LORD God formed every beast of the field, and every fowl of the air; and brought them unto Adam to see what he would call them: and whatsoever Adam called every living creature, that was the name thereof." THUS SAITH THE LORD GOD. Dedicated researchers DID not name them. ADAM DID.

I see an awful lot of insults flying but not one intelligent reply other than Elaine. I see nno one able to say anything about Genesis 2:19. Hmmm!

A "Big Bang" would be like an explosion. Are you trying to say a bomb went off and beautiful colors formed on butterflies, and birds, and flowers and etc..... Now who's not educated? Look at the detail of everything around you. look at God's creative power. Wow, you all are more lost than I ever imagined. I am so very sad for your souls. :(

@novangel: You need to read your Bible! Adam and Eve spoke perfectly in the Garden of Eden. God formed them beautifully and perfectly. It was not until they sinned, that death and decay entered into the world. That was the beginning of the fall of mankind.

"Wherefore, as by one man sin entered into the world, and death by sin; and so death passed upon all men, for that all have sinned:"

Of course, my theory is an insult to your intellect, because you know that if the Coca Cola can is made, there must be a maker. If it is designed, there must be a designer. The same is with creation. There was no big bang , we don't have back problems because we were lizards or whatever the infernal theory is you all believe. I know one thing. I have the the only thing I need when this life is over, do you? Are you ready to meet Jesus the one by whom all things were made and without him nothing was made that has been made? I pray that you will come to know him before your appointed time.