What are Obama Past Associations and Are They Important?

Barack Obama does not want anyone talking about his radical associations. He’s even sought criminal prosecutions against those who have dared to speak out on issues that make him squirm. Average Americans are judged by the company they keep, and our leaders ought to be held to the same standard.

Even though Obama says the issue is resolved (and John McCain refuses to raise it) voters must consider the case of Jeremiah Wright. Think of it this way: Barack Obama has himself estimated that he attends church twice a month. He spent twenty years at Chicago’s Trinity United Church of Christ under the leadership of Rev. Wright. Within this metric, a rough calculation concludes that Obama sat through approximately 500 sermons at that church. 500. Still, he claims he never heard outrageous, racist, or anti-American comments from the pulpit. Watch the following clips—you probably saw them back when this controversy erupted—and ask yourself if you believe Obama’s self-serving selective deafness. The man featured in these clips is the same man who performed Obama’s wedding and baptized his children. Notice that his unhinged rantings did not elicit stunned silence from his congregation, but approving cheers. Is Obama’s “this isn’t the Jeremiah Wright I once knew” a credible excuse? Can you imagine anything like this being said at your church or house of worship—much less applauded?

Bill Ayers is another name many Americans have heard by now. He is a former terrorist who detonated bombs at federal buildings and plotted to blow up an army dance at Ft. Dix, New Jersey. He remains proud of his actions,

and only regrets not having bombed more. Obama has been personal and professional friends with Ayers for more than a dozen years. When confronted with this association, Obama has said Ayers is (a) just a guy in his neighborhood, (b) a local professor, and (c) someone with whom he’d served on a charitable board. These are all true statements, but they obfuscate a much deeper relationship about which Obama is not being honest. In fact, the two served together on two boards—The Woods Fund and the Chicago Annenberg Challenge, where together they funneled huge sums of money to a who’s-who leftwing causes. Obama’s 1995 political coming-out party took place in the home of Ayers and his wife, a fellow unrepentant terrorist. Obama now denies this, but it’s a matter of record, confirmed by individuals who attended the party. Investigative journalist and Ethics and Public Policy Center Fellow, Stanley Kurtz, has written many thorough and indispensable articles on Obama’s substantial ties to Ayers. If you don’t have time to read them, consider the following videos.

First, CNN looks into Bill Ayers and the Obama connection. The report concludes that “the relationship between Obama and Ayers went much deeper, ran much longer, and was much more political than Obama says.” It also confirms the 1995 political party Ayers hosted for Obama. 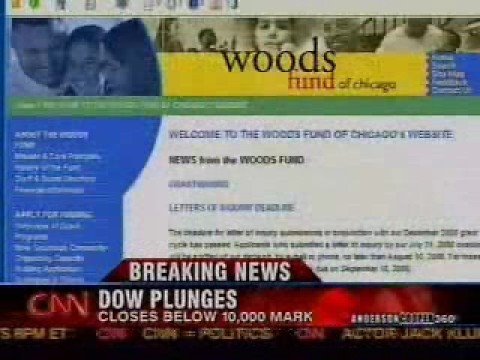 Second, Obama repeatedly states that Ayers’ violence took place 40 years ago when he was just eight years old. This is true, and it’s irrelevant. Would you shake hands with, let alone work comfortably with, someone who bombed the US Capitol and Pentagon, and remains proud that he did so? It is implausible that Obama didn’t know about Ayers’ sordid past, just as it’s implausible that he was unaware that Ayers’ hatred of this country continues to fester to this day. The following video features a 1998 ABC News interview with Ayers and his wife that showcases their continued defiance. It also portrays Ayers at a 1960s radical reunion just last year during which he describes the United States as he sees it today. Why did Obama feel comfortable around these people, and is it any wonder that he’s been less than forthcoming about their relationship?

ACORN is a community organization whose fraudulent voter registration activities have drawn indictments and investigations in more than a dozen states.

Their intimidation tactics in the 1990s forced banks into issuing unwise mortgage loans to low-income individuals, setting the stage for the recent mortgage crisis that send the economy into a tailspin. Barack Obama has denied any connection to ACORN beyond performing some minimal legal work on their behalf in the distant past.

Once again, this is an intentionally misleading understatement. As it turns out,