Why Did The Republicans PREVENT Sen Obama from Visiting The Injured Troops in Germany?

This is rich -- and disturbing.

The very Pentagon leaders that do not take care of the wounded troops, see this post below, prevented Barack Obama from visiting wounded troops in Germany. The Pentagon claimed Obama's visit would be political. He's a United States Senator for Christ sakes. Blocking Obama's visit is politics. Who at the Pentagon made this call? I want names. 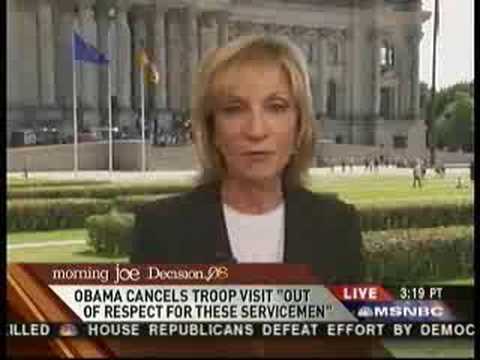 A person or people, not "the Pentagon," made the decision to prevent a U.S. Senator from visiting soldiers. John wrote earlier this week about the Chairman of the Joints Chief inappropriately injecting his views into the campaign. Be interesting to know which Pentagon officials gave this order -- and who was consulted from the Bush/Cheney administration.

For the GOP, "support the troops" is just a political slogan -- and that Bush/Cheney/Rove/McCain crowd uses every opportunity to play politics with these issues.

Keith Olbermann is gonna CRUSH This Issue tonight on Countdown.. This wont be good for McCain or the Republicans. Stuff like this will turn the American Public against you quicker then.....

Democratic presidential candidate Barack Obama scrubbed a planned visit to see wounded American servicemen and women in Germany because of concerns raised by the Pentagon that the stop at Landstuhl Regional Medical Center could be seen as a political event, according to Obama's campaign