Do you think a Democrat would have the guts to say this again?

Take note that JFK said this to the Greater Houston Ministries.

Imagine a Democrat going to a Southern Baptist Church and stating "I believe in an America where the seperation of church and state is ABSOLUTE".

"I believe in an America where the separation of church and state is absolute--where no Catholic prelate would tell the President (should he be Catholic) how to act, and no Protestant minister would tell his parishoners for whom to vote--where no church or church school is granted any public funds or political preference--and where no man is denied public office merely because his religion differs from the President who might appoint him or the people who might elect him."

I believe in an America that is officially neither Catholic, Protestant nor Jewish--where no public official either requests or accepts instructions on public policy from the Pope, the National Council of Churches or any other ecclesiastical source--where no religious body seeks to impose its will directly or indirectly upon the general populace or the public acts of its officials--and where religious liberty is so indivisible that an act against one church is treated as an act against all."

VIDEO OF THE SPEECH 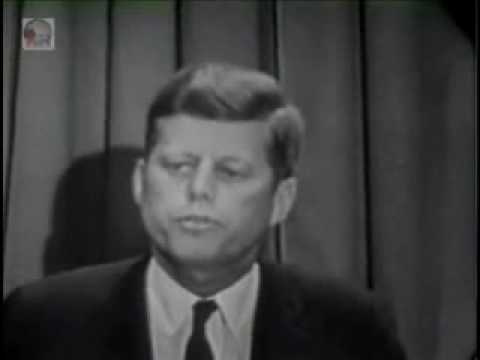 I WISH a Democrat would have the guts to say what JFK said.

I would say it too, but yet I was talking about a Democrat running for office.

It's a sad day when people like Pat Robertson say "seperation of church state is a lie of the left."