Ken Jennings called out for past insensitive tweets

How sleep habits may cut your risk of heart failure: Study

History hasn't been kind to fighters on comeback trail

What did the most ridiculous sign(s) read that you've seen at a game?

I was inspired by this: 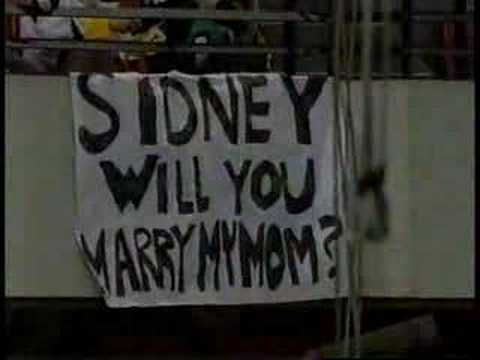 I've seen quite a few ridiculous Crosbymania signs, as to be expected. Lots of "five-hole" references. A few actually had phone numbers on them, not sure if they were the actual numbers of the sign holders, though I'm hoping not. Lol. Then there's the anti-Crosby signs which I consider part of Crosbymania too.

There was a group of guys sitting in front of me the last game of the season, which was Fan Appreciation Night as well as the Player Awards, and they had "LECLAIR FOR MVP!" signs. They were pretty funny guys anyway.

It's hard to recall any spectacular ones, but I know I've seen them! I just have to remember! (I remember simple ones, like "AHH, THE POWER OF CHEESE!" with #20's all over it, for Colby Armstrong, obviously.)

JENNI - With its gaining popularity, I wouldn't be surprised if there was a documentary on Discovery, "The wild male puckbunny... stalks its prey in a crowded arena..." ;)

JET - I wouldn't mind your bias...if you had at least answered the question and talked about a sign. Lol. Laaame.

DEREK - Ahahaha, I bet Sid gets razzed all the time.

HUNTER - Yeah, that was probably some bitter soul. Lol.

XTRABIGS - That IS pretty devoted...