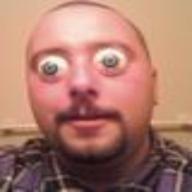 I have abandoned Y!A as it is yet another social networking site in it's roots. I didn't realize it & now I do. Goodbye fellow strugllers, I suggest you reconsider your internet usage as well. Be well & take care!