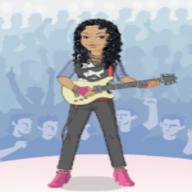 you can find me in the R&P and wrestling section. i'm a Rock'N'Roll Junkie. i can't do a day with out music. i'm always looking for new bands to listen too. i'm addicted to hair metal.I love to write and read.I plan to write three books in my lifetime; my autobio., a book about a band i made up, and a childrens book. I do yearbook and newpaper at school. I'm learning guitar and keyboard. My favorite books are "The Dirt" and "The Heroin Diaries." Mick Mars is God. Nikki Sixx is my role model. Vince Neil looks great in white tights. My favorite band of all time is Motley Crue. I also love Cinderella, Ratt, Bon Jovi, GNR and many more..i love just about anything from the 80's. QUOTE:"Anything Worth Doing Is Worth Overdoing"-Nikki Sixx" anything esle you wanna know just ask myspace: www.myspace.com/ fozzyrock247