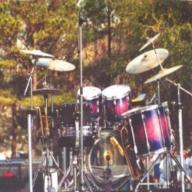 Working pro drummer since 1963. Avid motorcyclist and RV-er. Former U.S. Army Tank Commander. I love traveling & cruises. Married since 1974. Proud dad of two boys. Full-time American. Member of the Patriot Guard Riders. Vehemently anti-Islam and anti-illegal immigrants, and totally in favor of sealing our borders with regards to immigration, allowing only those we want to enter the U.S. Firm believer that we should use the taxpayers' money to fix America first. Free thinker not tied to any particular party or set of beliefs. I can be very conservative or very liberal depending on the issue. I try to do what's right, but admit I make mistakes. I know the difference between being respected by someone and being feared by them. I believe in American Exceptionialism, but acknowledge that America has lost her way to an extent. But the U.S. will abide, and we'll get our beloved country back on track.