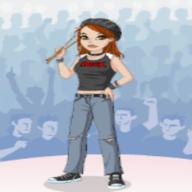 Well... obviously I'm crazy. I'm playing truth or dare with all of you and there hasn't been a single dare yet. :)