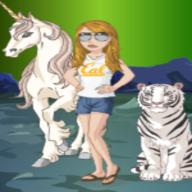 I love the San Fransisco Giants! Zito, Rowand, and Torres are my fav players but I love all my Giants. :] Packers are my fav for NFL and NBA is Kings, even though they really suck. LOL