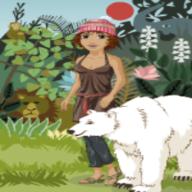 I love to laugh and believe laughter is the best medicine. I do horse vaulting which is gymnastics and dance on horseback. Almost like in the circus. I have competed in national and international competitions.