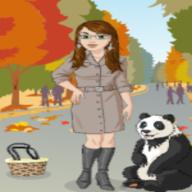 50/50 bi, same-sex married, left-leaning libertarian redneck woman who moved from Florida to NYC for love. I'm proud of all those things. I'm always willing to try to help, unless you're just blatantly insulting. I love pandas, NASCAR, swimming, surfing, vegetarian cooking, and just about every type of music except classical, opera, and jazz. That scent of orange blossoms and chlorine? It's me! My main blog is at: http://crackerlilo.blogspot.com My MySpace is at: http://www.myspace.com/greeneyedlilo (Everyone who would know says I was like Lilo from the movie Lilo and Stitch growing up!)