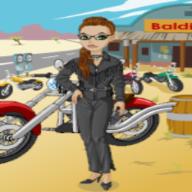 born 1944 outlived 5 husbands, have kids, stepkids, grandkids disabled, retired Degree in Electronics with computer minor, also FCC licensed, (commercial and amateur.) Shoot proficiently with variety of weapons, fly RC aircraft and rockets and like things that go bang or boom. Have worked at many trades over the years, including human cannonball (circus), among others. Can drive anything on wheels and some things on tracks. NO cellphone, Ipod, Ipad, or other "portables."