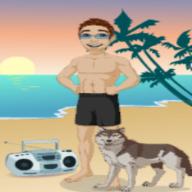 I am saved. Saved from my sins. Jesus loved me so much that He died for me. I cant comprehend why He loves me so much. He loves you too, if He didnt, He wouldnt have everything that happened to Him happen.