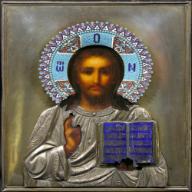 As one moves through the Sign, one recites, at the forehead, “Lord “; at the stomach, “Jesus Christ”, on the right shoulder, “Son of God”; and on the left shoulder, “have mercy on us” followed by a bow(to the ground during great lent). Joining two fingers together-the index and the middle finger-and extending them, with the middle finger slightly bent, represents the two natures of Christ: His Divinity and His Humanity. He is God according to His divinity and Man according to His humanity, perfect in both natures. The index finger represents His divinity, while the middle finger represents His humanity, since He came down from on high and saved those below. The bending of the middle finger is interpreted to mean that He bowed the heavens and came down upon the earth for our salvation...... http://www.rpsc.ru/ http://www.deathtotheworld.com/