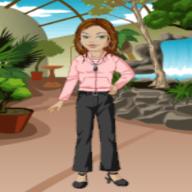 Hi, Im Bindi, I live in Victoria, Australia with my pets- American Bulldog, Dolly, Parrots Inca & Connor, rats, and rabbits. My main passion is animals- particularly dogs, parrots, and small mammals :) I am currently completing a cert III in Dog behaviour and training and would love to work as a dog behaviourist in the future- although I really love all aspects of pet ownership. I also work as an insurance agent, so I am occasionally able to offer advice on Australian insurance related questions as well.