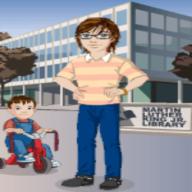 I'm an agnostic/atheist bi FTM with Asperger's Syndrome. I was born in The Netherlands in 1984, but I've been living in Texas since 2004 (owned a house since 2007, yeah!). I have a transwife who was born in 1976 and a son who was born in August 2007. My opinions often aren't PC, which probably has something to do with me being rational to a fault - told you I'm autistic. If I call something a disorder it doesn't mean I think it's okay to discriminate against people with said disorder. Also, I sometimes say stuff other people take seriously even though it really was just a joke. Chill, people. My main interests are education, parenting, gender, and science. I'm currently working on a BS in Information Science so I can some day become a librarian. While trying to study I'm also being a stay-at-home dad to my son... right. It helps that I'm f*cking brilliant. :P