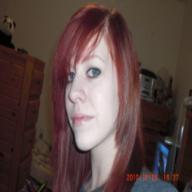 I never know what to say on these things! I don't think I'm like many people; however, I don't try to be different. I just happens-- for better or worse.