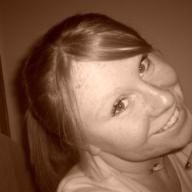 My name is Chelsy. I am 20... going to school to be a teacher. I recently got out of a very serious relationship (his decision), and I don't know where to go from here. I love meeting new people. So hit me up... have a lovely day