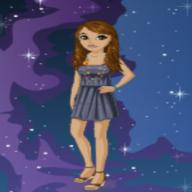 I am working with a literary agent on my book :) Here is a bit of my writing (something I wrote just now for this!) She had never seen anything so beautiful in her life. Its claws were long and slender, cracked like a smoker's yellow nails, but naturally painted a cool black. Its eyes glittered, a churning storm in the sky, laced with fire, hard as vodka. Deft limbs, touched with fur in some places and charred skin in others, twisted across the floor as it ran at her. She considered letting it live. It was quick and lithe, with a hyena-esque snout twisted into a devilish grin that forced her to mirror its look with a scowl. And it was going to kill her. She raised the crossbow in one sharp motion and let the arrow fly. The point of the weapon hit the beast square in the chest and it stumbled and fell like a Jenga tower. There was still a certain grace to the hound as it pitched forward and rolled through the dust to her feet. She sighed. It was for the best after a