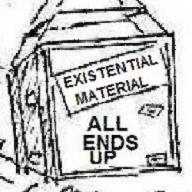 moody[NB: Before Yahoo! fuzzed it up, my avatar was simply a crate marked "Existential Material", having a sticker saying "All ends up"] 'Socrates' is a nickname I once had many years ago. It was given to me by a fellow player in a backroom poker game. I believe he was trying to tell me I was too intellectual or philosophical. Truth is, if you do some research on the real Socrates, you'll find that even though he may have made contributions to our culture, and was a respected teacher of youth, he was basically annoying. No one calls me 'Socrates' anymore. I am still basically annoying. I am a disabled 62yo male living in S. Florida. I used to write songs as well as poems, but nerve damage in my hands has stopped me from playing guitar. I tried some therapy, but I doubt I'll ever play as I used to. I'm also slow to do things, like typing and getting back to people. Please be patient or just throw your hands in the air