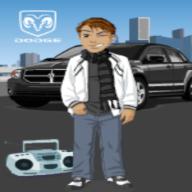 I am a 21yr old student of Electronic Engineering from Karachi (Pakistan), a computer graphics and webdevelopment fanatic and a small-time current affairs commentator!