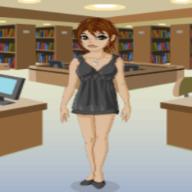 I don't have anything to really put, I change to often for my own good and I'm into many things, I'm liking anime and manga right now and I tend to start acting like charecters of shows without really trying.