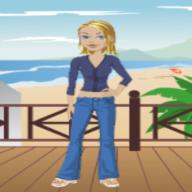 Hi there, i'm Laura. I have all kinds of interests and a stack of random knowledge that i've aquired along the way. I really enjoy Yahoo Answers, its quite the intellectual treat! Sorry, i'm too lazy to do the 360 page, but you can go to this website and read one of my favorite stories! It's not too long, and it'll boost your spirits! http://members.tripod.com/~TechBabe/places.html