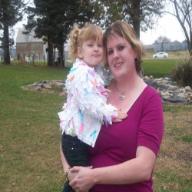 I recently graduated from a small liberal arts college in the midwest with my bachelor's degree in English. In my very limited free time, I enjoy reading, writing, watching movies, and spending time with my husband and young daughter.