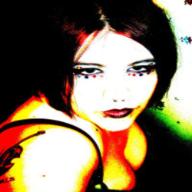 I am a photographer, musician and promoter based out of Oklahoma City. I love body modification and have spent many years educating myself on the subject. I am also a member of S.B.S. (Sick Boyz Suspension), which is a human suspension group based out of Oklahoma City. piercings, for those who might want to know: in ears: 00 gauge first holes 4 gauge second holes 8 gauge third holes 14 gauge UFO piercing (rook to forward helix) (left ear) 14 gauge conch (right ear) 14 gauge vertical industrial (right ear) other parts of the body: 14 gauge tongue (retired) 14 gauge left nipple (retired) 14 gauge septum 14 gauge right lip (x2...spider bites) 16 gauge left nostril 16 gauge right nostril 14 gauge bridge 16 gauge vertical lobe with snug placement (x2...one in each ear) I'm an avid traveler. I average 40K miles a year on road trips. You can usually find me at concerts in OKC or in the Dallas/Fort Worth metroplex. If you happen to see me, come up and say hi