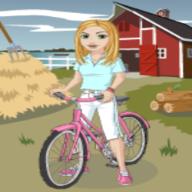 I am interested in self improvement. I am a mother of 3. I live in the country and commute 1 hour to and from work. I love animals. I love to help others when I can. I love country music.