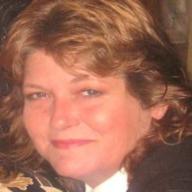 I'm a mother of 3 grown kids and a pit bull and a grandmother of one, ex of one man wife to another. I had a rough upbringing, my step dad drank and raised all kinds of hell. My mother who I later realized loved me dearly, beat me daily and put it in my head I was a loser and bad. I stuttered into my early 30's which made it hard to socialize, but having started work on my self image as a preteen and after the confidence gained by joining the service, I finally got over the stutter. My belief in God was and is a hugh factor in all that I am and where I put the credit for all thats good in me and the world. I had a bad drinking problem I over came, a drug problem I dealt with and have learned no one is perfect but deserves respect anyway including myself. I love animals, outdoors, a nice garden, a good cry, chocolate, fishing, doing my art, (I draw, paint, craft stuff) a good deal and being told my cooking is great. I also like to make someone feel better, to be nice.