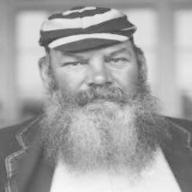 I was an unwanted child. My mother left me outside of town to be raised by wolves. We lived in Omaha, so the prairie dogs found me. I lived in a burrow system where my adoptive parents taught me how to bark and scurry. At 7, I was rescued by the scratching monks of the Order of St Derek. The life was hard at he monastry. Our daily rituals began with rising at 5 am for one hour of scratching ourselves in the chapel. We scratched three more hours during the day, and at evening vespers we only rubbed, to avoid permanent skin injury. After living on the dry prairie, my flaky skin let me scratch myself enough to win the trust and confidence of the monks. I was sent to study divinity. Then the Order split apart over whether St Derek would have used modern skin relief like steroid creams, or traditional ointments made from bat droppings. I left the bitter conflict and the smell of bat poo behind and became a lay preacher. My humble mission: to bring the world enlightenment.