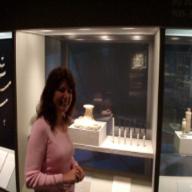 I'm am a supervisor at work. I'm married to a wonderful knucklehead who could drive you nuts but I love him like crazy. I've been through alot so I understand where alot of people are coming from. Happy days to you.