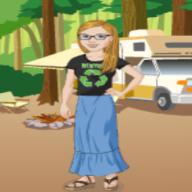 I live on a farm; we raise chickens, vegetables, fruit, and a plethora of small pets. I love to sew, knit, crochet, cook, and ALL of that stuff.