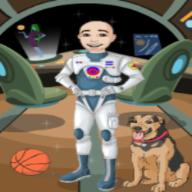 Sugar. Spice. Basketball. Basketball is life and Yahoo! Answers allows me to answer all the basketball questions I can possibly answer. All day. All night. If ya do want to yahoo IM: sparkloom