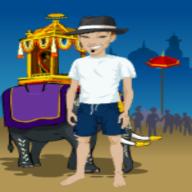 I walk around with a spiffy top hat and cane.