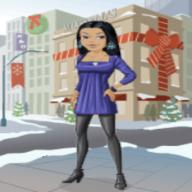 Pets are the best!

I am a pretty much normal person. I like cats and fish, but cats better. I am into hip hop, rap, rock and pop. I have lots of friends.