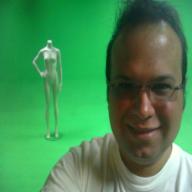 It doesn't matter how good you are at something. 'Cause out there there a many people who are a hundred times better than you.